The eggplant is a delicate, tropical perennial often cultivated as a tender or half-hardy annual in temperate climates. The stem is often spiny. The flower is white to purple, with a five-lobed corolla and yellow stamens. The egg-shaped, glossy, purple fruit has white flesh with a meaty texture. The cut surface of the flesh rapidly turns brown when the fruit is cut open.

Botanically classified as a berry, the fruit contains numerous small, soft seeds that, though edible, taste bitter because they contain nicotinoid alkaloids like the related tobacco. 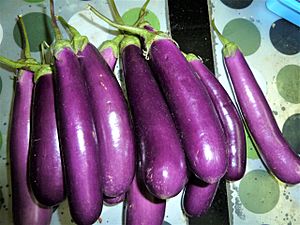 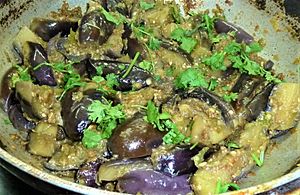 Brinjal with ginger, green chilli paste and coriander curry made in a house of Andhra Pradesh, Vijayawada 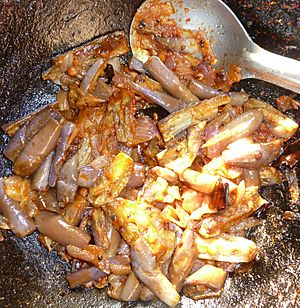 Brinjal with onion curry made in a house of Andhra Pradesh, Vijayawada

The plant species originated in cultivation. It has been cultivated in southern and eastern Asia since prehistory. The first known written record of the plant is found in Qimin Yaoshu, an ancient Chinese agricultural treatise completed in 544. The numerous Arabic and North African names for it, along with the lack of the ancient Greek and Roman names, indicate it was introduced throughout the Mediterranean area by the Arabs in the early Middle Ages. A book on agriculture by Ibn Al-Awwam in 12th-century Arabic Spain described how to grow aubergines. Records exist from later medieval Catalan and Spanish.

The aubergine is unrecorded in England until the 16th century. An English botany book in 1597 stated:

This plant groweth in Egypt almost everywhere… bringing forth fruit of the bigness of a great cucumber…. We have had the same in our London gardens, where it hath borne flowers, but the winter approaching before the time of ripening, it perished: nothwithstanding it came to bear fruit of the bigness of a goose egg one extraordinary temperate year… but never to the full ripeness.

Because of the plant’s relationship with various other nightshades, the fruit was at one time believed to be extremely poisonous. The flowers and leaves can be poisonous if consumed in large quantities due to the presence of solanine.

The eggplant has a special place in folklore. In 13th-century Italian traditional folklore, the eggplant can cause insanity. In 19th-century Egypt, insanity was said to be “more common and more violent” when the eggplant is in season in the summer.